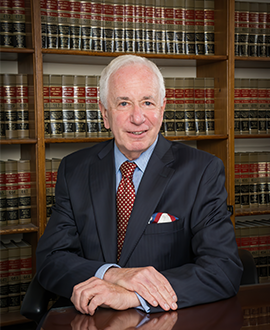 ROBERT L. GARFINKLE received a Bachelor of Arts Degree in economics from Long Island University in 1971, and his Juris Doctorate Degree from New York Law School in 1974. He was admitted to practice law in New York State on May 5, 1976.

Immediately prior to joining our firm, Mr. Garfinkle was an Elections Commissioner for Suffolk County.  Prior to that time, he was a Bureau Chief in the Suffolk County Attorney’s Office and an Assistant Town Attorney for the Town of Huntington.  He concentrated on condemnation and tax certiorari matters, contracts, land title disputes involving tax deeds, and public finance.  He has acted as general counsel to the Suffolk County Vanderbilt Museum and the Suffolk County Electric Agency.  His practice includes both trial and appellate work. Mr. Garfinkle concentrates on business and commercial transactions also advising clients and negotiating on their behalf with municipalities including Town and County Industrial Development Agencies.

PRIOR EMPLOYMENT OF NOTE